Biography is the thread connecting all the events: performances, presentations, workshops and talks.

The workshops will focus on theatre education and its role in reshaping gender perception in society. 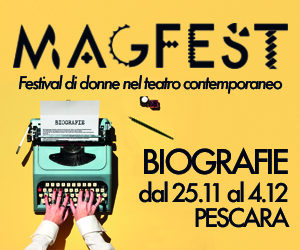 “You can dance like a flower, you can imitate it and it will turn out to be everybody’s flower, trivial, and lacking in interest; however, if you place the beauty of such flower and the emotion it sparks in your dead body, then, the flower you have created will be unique and real.” Kazuo Ohno

Butoh, a form of contemporary Japanese dance, is a way of patient discovery and personal research. It explores the body as ever transforming platform to find one's own organic body and transform movement into dance. The workshop proposes practices and exercises to be present and listen to the continuous flow between the inside and the outside of the body.

Elena Mastracci – artist and performer, one of the founders of Rogo Teatro, focuses her research on the contamination between visual and performing arts (theatre and butoh). She has trained with Japanese masters such as Masaki Iwana, Yumiko Yoshioka and Atsushi Takenouchi.

The director and playwright Letizia Quintavalla will talk about the genesis and the development of her theatre projects aimed at the education of the younger generations in Italy and in Africa. Her talk will focus on the educational value of theatre that can involve children as aware spectators and actors of their personal growth. She will present her experience with Progetto Antigone, a collective of actresses who “feel responsible for the memory and transmission of important stories from their cultural heritage and wish to perform a political action through theatre”. Since 2012 they have performed for children and teachers Parole e Sassi, the story of Antigone about the relationship between women and power.

Letizia Quintavalla
Director and playwright, one of the founders of Teatro delle Briciole in Parma. Her artistic development focuses on research theatre and theatre for the younger generations. Her most significant projects include:  Progetto Malkia (2005-2011 Amref/Teatro delle Briciole), a long theatre workshop within the program Children in Need for street kids in Nairobi, Kenia; Reconciliation through arts: Perceptions of Hijab (2007-2009 Fondazione Aida), an EU project for cultural mediation through theatre on the topic of the  Islamic veil, with women from Maghreb and the Middle East in the city of Verona; La Compagnia dei bambini (2009 – 2011 Teatro delle Briciole) a company of children doing theatre for adults. In  2012 she has founded the Collettivo Progetto Antigone with 19 actresses, each based in one Italian region.

Francesca Romana Rietti
Ph.D. in Performance Studies at La Sapienza University in Rome, in 2010 she published the book Jean-Louis Barrault. Artigianato teatrale. She founded the Archives of Odin Teatret in 2008, together with Mirella Schino and Valentina Tibaldi, and she is a current collaborator of the archives. Since 2015 she teaches at the Department of Philosophy Communications and Performance of the University of Roma Tre, as university tutor with part-time contract. She is a member of the new editorial staff of the journal Teatro e Storia and collaborates with the monthly review L’indice dei libri.

An extract from the performance PAROLE e SASSI with Mariangela Celi

A Greek tragedy for children. Antigone, ancient drama of brothers and sisters, missed agreements, rituals, unwritten laws and blind fortune-tellers, as narrated through the centuries starting from the play written by the Greek poet Sophocles in 440 b.C.. Using only some stones, an actress tells the story to the younger generations.

PAROLE E SASSI from 2012 to 2016 the performance has been presented to 22.000 children all over Italy.
Parole e sassi is winner of the Eolo Awards 2013 as Best Creative Project.