The Magdalena Project in Brasil

Florianapolis is a beautiful place. It is an island connected by a bridge to mainland south Brazil. The city of Florianapolis is surrounded by water – the hills across the water on the mainland frame both city and the glorious beaches that boast to be the best in South Brazil. White dunes, waterside fish restaurants, selling oysters by the bucket load and the efficient but stressless approach to work, at which Brazilians excel, make this a very pleasant place to have been hosted for three weeks.

Magdalena – Vértice Brasil staged its third bi annual festival from July 8– July 16th 2012. 70 participants and artists gathered from all over Brazil with international artists from Mexico, Costa Rica, Argentina, Uruguay, Chile, USA and Julia Varley of the Odin Teatret and myself from Europe. The festival shared performances, workshops and talks both in the city and at the Cacupe SESC[1] campus, where we all lived and ate for the duration, on the edge of the water outside of the main metropolis. SESC were major funders of this event.

Marisa Naspolini first encountered the Magdalena Project at Julia Varley’s Transit Festival in 2004. Like so many before and since she was inspired and motivated to bring the experience to the women in her city and to challenge the cultural and academic theatre context in which she was working. Actress and academic Barbara Biscaro, actress and film producer Gláucia Grigolo, and Monica Siedler – dancer and performance artist joined Marisa to create and organise Vértice Brasil.   The three festivals (2008, 2010, 2012)  that they have manifested have been distinct; there has been a learning curve with a steady increase in funding along with,  of course,  the insistence to be taken seriously by the artistic community, their universities,  and the arts funders in their city. Nothing new there – no matter what the geography it is always the same. No matter how competent and admired as academics, artists and teachers – they are still women proposing to invite women to come together and share their work. It is marginalisation that has been repeated around the Magdalena world. No matter – the project has just grown and grown – there is no stopping it - because it works, feeds, challenges and inspires those – men and women – who come into contact with it. The Magdalena Project is a success story and a model of global networking and intercultural collaboration that defies the isolation that is, arguably, imposed on the voice and work of women artists.

The programme of work was varied – reflecting the interests of each of  the four protagonists. So we had the cutting edge work of Mexican performance artist Violeta Luna, Julia Varley’s homage to Chilean actress Maria Canepa, Costa Rica’s Vicky Cortéz exploration of the myth of Euridice and Orpheo, street and beach actions from Michele Minnick from USA, dance innovations from Andrea Lamana, Uruguay, and    Tainá Barreto from the north of Brasil and clown work and children’s performances from Magdalena Secunda Generación from Buenos Aires and As Marias da Graça from Rio de Janeiro, who met in a previous Vértice and formed their beautiful winning clown duo which has gathered fans now throughout Brazil. These artists also led daily training workshops.

Apart from being extremely well organised this Vértice marked a coming of age. As it heads towards its next festival in 2014 the desire and emerging confidence is to engage with some more robust artistic risk taking; to step away from the safe pleasing, predominately text based play making and to forge experiments across the possibilities that more profoundly reflect the aesthetic and political priorities of these women and their compatriots. This organisation is rooted and respected and I believe has a very interesting and influencial future.

Vértice is not the only ongoing Magdalena festival now established in Brasil. In September (10-16) Solos Ferteis directed by Luciana Martucelli will be mounting it 2nd annual festival of women’s solo performances, with an impressive international programme, in the capital Brasilia. 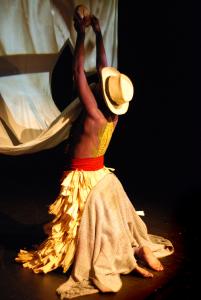 The festivals are growing in number around the world year on year. Present also at this Vértice were Antonieta Muñoz  and Veronica Moraga of Domo Teatro, Santiago, Chile who determine to mount their first Magdalena Festival in May 2013. Paola  Vellucci has been raising funds to stage Magdalena MultiCidades (translating as a play of words of multiple cities and multiple ages) in Rio de Janiero in September 2013. And these initiatives for 2013 join an already impressive programme of Magdalena events – Transit 7 in Holstebro, Denmark, MagFest in Pescara and Abruzzo in Italy, Magdalena Secunda Generación’s on going annual festivals, and there are proposals being developed in Guanajuato Mexico, Madrid, Spain and in Calgary, Canada. All international festivals staging only women’s performance work.

For me personally this trip was hugely rewarding, both professionally and personally. I spent two weeks prior to the festival working in a very amenable space in Lagoa da Conceição, on my current practice as research performance DOHTER, with 10 performers aged from 19 – 67 and the work in progress showing opened the festival on July 8th. I led a very enjoyable 3 day workshop on the theme of my last performance – The Threat of Silence - and also as a consequence of this have received several new invitations including a visiting lectureship to a university in Rio de Janeiro.

JILL GREENHALGH. July 2012. Jill is the founding artistic director of The Magdalena Project – International Network of Women in Contemporary Theatre and lecturer in Performance Studies at Aberystwyth University.

[1] SESC (Serviço Social do Comércio, Social Service of Commerce) were the major funders of this event. Itis a huge non-profit institution acting throughout Brazil with the purpose of promoting culture and good-living among workers and traders and their families. It was founded in 1946.