the challenge of streaming

Magdalena festivals are wonderful comming-together times, when women from all over the world converge for a short, intense period of performances, workshops, presentations, conversations and meals. There are reunions after many years, new encounters, and the pleasurable translation of knowing-by-email into physical meetings. But for every participant at a Magdalena festival, there are many more within the network who are not at the festival. This year, for the 25th anniversary festival, I wanted to include those people who for whatever reason - finances, family, health, visa problems, other commitments - couldn't make it to Cardiff. I proposed that we stream via the internet the conference parts of the festival, and that there also be a programme of "streaming in" - short presentations from women "out there" in the network. 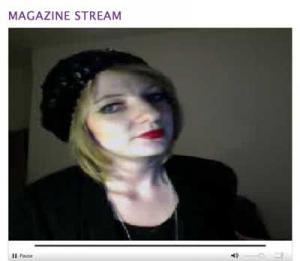 Aided and abetted by the trusty web princesses Valentina Tibaldi & Jessie Brookes and a number of very obliging technical staff at Chapter, we ran long cables into the various spaces, configured temporary wireless networks, gaffa-taped a video camera to a tripod and performed various other feats of low-tech wizardry in order to achieve our aims. We streamed the opening on Tuesday evening, the four conferences from 2pm until about 4 or 4.30pm every day, and Wednesday was the day of streaming in. Technical difficulties meant we got off to a slow start and were not able to hear Margarita Borja from Spain (but you can read her presentation here), then because we ran over time we had to stop before hearing from Chelsie Preston Crayford in New Zealand and Bond Street Theatre in New York. But we had great presentations from Magdalena Singapore, Magdalena Australia, and Ruby Brunton (also in Australia, pictured at left). The festival participants in Cardiff watched these streams, along with the remote presenters and others watching online from around the world. It was disappointing not to be able to see everyone who had prepared for the streams, but Ruby and Chelsie will record their presentations to be linked to from here, and Marga has provided her text. 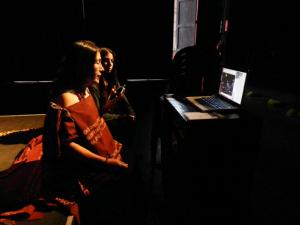 That same afternoon, an extra streaming-in was added to the programme: Ana Correa (pictured at right) had been prevented from coming at the last minute due to visa problems, so in the slot where she would have delivered her work demonstration, we streamed her in to the cinema and she delivered a shorter version of her presentation, which was much appreciated by everyone at the festival. (You can read the text from her presentation here.)

The conferences were attended online by between 15 and 25 people each day, including some regulars who came every day and contributed through comments in the text chat. Margaret Cameron in Australia and Leticia Castilho in Brasil were the two most regular, but others including Lis Hughes Jones, Guandaline Saglioco, Miff Moore, Scotia Monkivitch, Ruby Brunton and others who were not logged in took advantage of the window into the festival.

We were presented with different technical challenges each day, from network problems in the spaces to the camera's power supply failing and many other little problems in between. A few times, the chat function (which is a part of this new web site) didn't seem to like having more than a handful of people in it, and caused the entire site to appear as if it was offline. Fortunately this did not disrupt the stream for those who were watching, but it did mean that some people who were trying to enter could not. We quickly improvised an alternative way to the stream, but interestingly, this problem seemed to resolve itself as the week went on. Perhaps the system just needed more of a warm-up ... but overall, everything worked very well and it was fantastic to have the presence of our remote audience, their comments in the chat (go to the programme to access the archived chats for each conference) and the presentations of those who streamed in, adding their own voices to the richness of the festival. 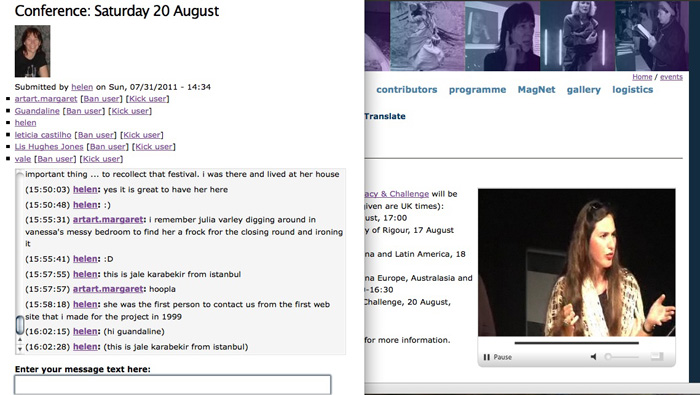 It was a mammoth undertaking and hats off to you, Valentina and Jessie for making it happen!